The Best of TheaterWorks! 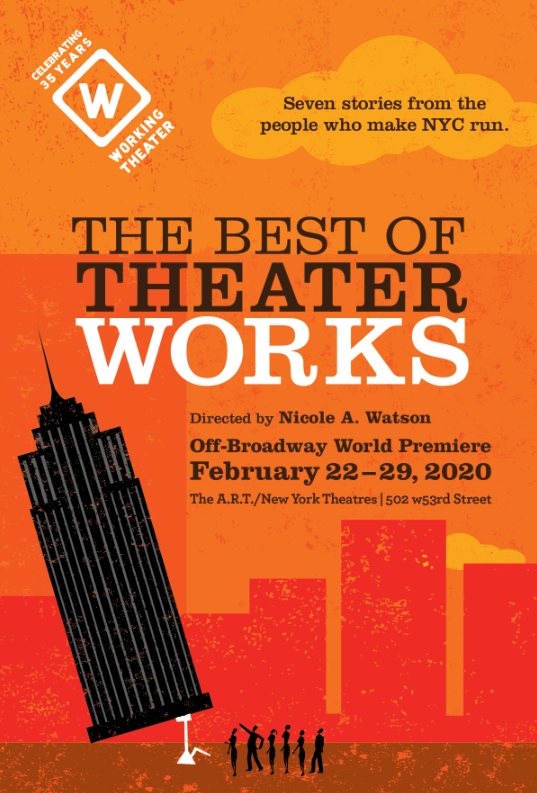 An off-Broadway production featuring the best short plays to come out of the last 19 years of Working Theater’s TheaterWorks! playwriting program, offered to working people across New York City.

Directed by Nicole A. Watson

Deemed some of our favorite works to come out of our TheaterWorks! playwriting and performance program, these plays will transport you from a doorman’s dystopian vision of the lobby of a NYC residential building, to the community room in an apartment complex as a young man struggles to come out to his mother before his 14th birthday, to a NYC hotel room where two old friends reconcile differences before attending a Star Trek convention.

Neysa Lozano (Actor) is an actress in NYC, an alumni of NYU Tisch, and a member of the Flea Theatre where she recently appeared in
Sincerity Forever. Other roles include Ome in Hurricane Sleep at IATI Theatre and Sonia in Life Sucks at Company of Fools. She is also an avid Tarot reader. To find more information check out her website neysalozano.com

Reynaldo Piniella (Actor) was previously seen Off-Broadway in The Death of the Last Black Man…, Venus (Signature), The Skin of Our Teeth (TFANA), Lockdown (Rattlestick), The Space Between the Letters (The Public/UTR), Terminus (NYTW Next Door). TV credits include “Sneaky Pete”, “Flesh & Bone”, “Greenleaf”, “The Carrie Diaries”, “Law & Order: SVU”, “NYC 22”, “Us & Them”, “Louie” and “The Daily Show with Jon Stewart”. Film credits include Madeline’s Madeline, One Percent More Humid and Broken City. He received the
Fox Foundation Resident Actor Fellowship from TCG and the Thomas Barbour award for playwriting. He will next be seen in the
Public Theater’s production of Cymbeline. Follow him on Instagram and Twitter @ ReynaldoRey. www.reynaldopiniella.com

Brenda Pressley (Actor) – Ms. Pressley’s Broadway credits include The Lyons, The American Plan, Cats, Dreamgirls and The
Moony Shapiro Songbook. Off-Broadway Brenda starred in Proof of Love, Surely Goodness and Mercy, Almost Home, The First Breeze of Summer, Seven Guitars, Fran’s Bed, Marvin’s Room, And The World Goes ‘Round (Outer Critics Circle Award) and Blues In The Night. Regional theatre appearances include: Skeleton Crew, Flyin’ West, Intimate Apparel, Black Odyssey, Trouble in Mind, The Old Settler (Barrymore Award), Blues For An Alabama Sky and A Raisin In The Sun. In film, Ms. Pressley has appeared in Before/During/After, Third Street Blackout, Detachment, 16 Blocks, Cradle Will Rock and It Could Happen To You. On television, Brenda has guest starred on such shows as “Almost Family”, ”The Path”, “The Good Wife”, “Elementary”, “The Mysteries of Laura”, “Body of Proof”, “Law and Order; Deadline”; “Law and Order-SVU”, “Harambee”, “Lifestories” and “Brewster Place” (with Oprah Winfrey).

DaRon Ross (Actor) – With more than ten years of acting experience in theater, film and TV, DaRon garnered critical acclaim in the renowned production of David Rabe’s Streamers as ‘Carlyle’. He also received accolades for his role as ‘Kyle’ in “Death of a Nation” (winner of the Directors Circle of Shorts, the Golden Eagle Award, and Indie Fests’ Best Short Film). “Cigarettes for Breakfast” marked his debut as lead male, as well as Associate Producer in a feature film, and was an official selection at the Urban World Film Festival in New York City. DaRon also has credits as a Guest Star on powerful shows like “Blue Bloods”, “Daredevil”, “The Family” and HBO’s “High Maintenance”. He is delighted to be reunited with Best of TheaterWorks for a second tour.

Alma Brothers (Playwright) worked for private firms throughout her career. She also worked for Government Agencies for the City of New York for 28 years. Alma earned a master’s degree from Queens College in Urban Studies through her Union, CWA 1180, Education Program. She retired from the City of New York 5 years ago. Alma does volunteer work at her church and loves traveling, exercising, swimming, painting and spending time with her 8 year old grandson.

Carlos Cotto (Playwright): Born and raised in New York City, Carlos has worked as a porter at Gramercy East for over 10 years. He has written and performed in 3 sessions of the TheaterWorks program through 32BJ. Ever since he could read and write, Carlos was fascinated with the craft of storytelling and the importance of stories in our everyday lives. Through acting exercises and free association writing, TheaterWorks has helped refine his skills. Since the program, Carlos has chosen to pursue writing further by working on screenplays in his spare time. TheaterWorks has changed his work environment for the better. He is grateful for the support from coworkers and residents and hopes the program will continue and expand so other members can benefit from everything it has to offer.

Constance H. Gemson (Playwright) creates and conducts original workshops throughout New York City. Topics include: Coping with Change: Creating the Future with Confidence, Friendship: Connection and Community, Going Solo: Valuing Your Time Alone and other themes. She is the co-author of the in-house publication Home Again: Here to Stay: A Manual for Culture Change in Long Term Care. She has led creative writing workshops at Memorial Sloan- Kettering Cancer Center, NYPresbyterian Hospital Center, Lenox Hill Neighborhood House and continues this work at other sites. She is a free-lance writer. Her recent essay: Grace Notes: Singing in Marion’s Hospital Room was recently published in Narrative in Social Work Practice: The Power and Possibility of Story by Columbia University Press. She has been an adjunct lecturer at LaGuardia Community College and Hunter College.

Valerie Knight, Ph.D. (Playwright) is a licensed clinical psychologist that engages the therapeutic arts. Her journey started with the professional theater and exploring bereavement  issues with Elisabeth Kubler-Ross. Since then, her work has radiated outward into a variety of settings. Her specialties include victims of trauma, care for the caregiver and health professionals, HIV/AIDS, loss and bereavement, and the psychological needs of women and people of color. She has taught CUNY psychology courses on site at District 1199 for 16 years. She maintains a private practice in Manhattan.

Althea Matthews (Playwright): Althea is a native of New York City, born and raised in Harlem. She is the mother of 2 sons and one daughter, with 7 grandchildren and 2 great grands. She is an advocate and leader of Vocal NY (Voices of Community Activist Leaders) that educates and fights for the homeless, civil rights, safe consumption sites and more. She is a member of CASA (Community Action for Safe Apartments) and the Right to Counsel Coalition that educates and fights for tenants’ rights. She helped make history on August 11, 2017 when Mayor Bill De Blasio signed a bill leading NYC to be the first city in the nation giving tenants facing eviction legal representation in housing court. Althea is also a member of Peer Network of New York, part of the Bronx Collective Impact Project. As a peer educator she does weekly outreach to educate individuals and the community about harm reduction. Althea first advocated in 1978 for herself. Throughout her life she has continued to donate her time. She was on the Economic Empowerment Committee at Riverside Church headed by Senior Pastor James Forbes. She interned at Harlem United and received her Human Services Certificate in 2010. She continued to volunteer her services, helping clients suffering from HIV/AIDS and with the needle exchange program until 2018. A former Certified Nurse’s Assistant, she presently works with adults with autism and intellectual disabilities. Althea is a member of the Jackson Democratic Club. In her free time she loves reading and listening to music. Her favorite network is PBS and she is a proud sponsor of St. Jude’s and Feed the Children Organization.

Michael D. O’Hara (Playwright): Michael is a native New Yorker, a graduate of CUNY/Hunter College and a member of the Dramatists Guild. He’s been a photographer, graphic designer, editor and publisher of newsstand magazines. Michael is a Certified Consulting Hypnotist and the cofounder of Manhattan Hypnosis. TheaterWorks! has presented readings of nine of Michael’s short one-act plays – On Her Sixteenth, M.O.C., Sunset Cowboy, To Boldly Go, The Luxury Life, Sick Day, Summer with Stroyko, World’s Sexiest Handyman, Everything Must Go and The New Golden Age. Fourteen of Michael’s one-act plays have received readings and/or full-stage productions nationally. Special thanks to our playwriting potentate Joe Roland; 32BJ SEIU President Hector J. Figueroa (in memory) for his ongoing support of this project; Mark Plesent and the Working Theater, the amazing actors, and the wonderful audience.

Dhipinder Walia (Playwright) is an English PhD candidate at the Graduate Center as well as a full-time lecturer at Lehman College. Her research interests include the rhetoric of diversity both in the writing classroom and in the university. For fun, she likes to write short stories and memorize dialogue from episodes of “The Office”.

Nicole A. Watson (Director) is thrilled to be back at Working Theater. She is the associate artistic director at Round House Theatre as well as a freelance director and educator. Recent credits include The Niceties (Geva Theatre) School Girls; Or, The African Mean Girls Play (Round House Theatre), A Doll’s House Part 2 (Round House Theatre), Sweat (Asolo Repertory Theatre), and Skeleton Crew (Baltimore Center Stage). She is an associate artist at Cincinnati Playhouse in the Park, a New Georges affiliated artist, an alum of the Women’s Project Lab, the Drama League, and a member of the SDC. As a director she has worked at the O’Neill Theater Center, Baltimore Center Stage, Playmakers Rep, Theater Latte Da, Asolo Rep, the New Black Fest, Oregon Shakespeare Festival, New Georges, Working Theatre, the Lark, New Dramatists, and the 52nd Street Project. As an educator she has worked at the University of Maryland College Park, the Kennedy Center, NYU, North Carolina School of the Arts, Smith College, Two River Theater, Long Island University, and ACT in San Francisco. Along with Dina Vovsi, Luke Harlan, and Rebecca Martinez, Nicole curated The Working Theater Directors Salon for 5 seasons. Her interest is in new plays, especially those that interrogate history and amplify the narratives of those who have been ignored or misrepresented. www.nicoleawatson.com