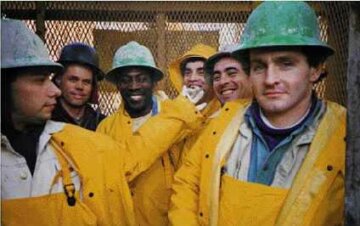 An Obie-award-winning piece by Marty Pottenger, which tells the story of the planning, building, and financing of the largest non-defense public works project in the Western Hemisphere- the building of a third water tunnel to insure the continued delivery of water to all of New York City from the upstate watershed regions.  The cost so far: several million dollars and 24 human lives.
“…Marty Pottenger establishes a city water delivery system as the backdrop for an often lyrical show that speaks with intimate knowledge and yes, even love, about holes in the ground and the people who drill them…the approach is a blend of Studs Terkel, Anna Deavere Smith and Pete Seeger.” Peter Marks, The New York Times, June 9, 1998