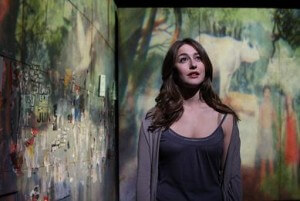 at Theater for the New City

King of Shadows is a world premiere by Roberto Aguirre-Sacasa (Good Boys and True- Second Stage; An Almost Totally True Story- Manhattan Theatre Club; Dark Matters- Rattlestick). The story centers around Nihar, a 15-year-old homeless runaway selling sex to survive, who claims he’s being pursued by supernatural demons. When Jessica, a young social worker, takes him in, he forms a dangerous bond with her teenage sister that threatens everything she values. The famous fog of San Francisco mixes with a fog of fantasy and fear as each try to protect against a danger they don’t understand.   Who to trust?  What to believe?  Where are the boundaries? These remain unsolvable mysteries for two public servants and our society’s most vulnerable.