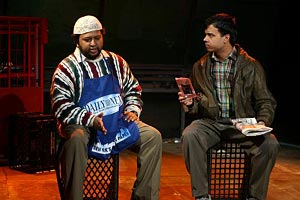 Pervez, a Pakistani cab driver, is haunted by the ghost of his religious brother after he is picked up by the FBI on suspicion of terrorist activity. The brothers came to America to live a secular life in relative safety and now find themselves on two very different paths as they respond to the alienation they feel here.  Pervez reaches out to a homeless alcoholic who lives in the men’s room at Port Authority and a Christian missionary from Akron, Ohio as he attempts to navigate the lonely terrain of post-9/11 New York City.

“Debargo Sanyal, as Pervez, and Annie, McNamara as Barb, the mild-mannered missionary, get Port Authority Throw Down off to a rousing start . . . there are well deserved laughs and fine performances . . . [the play] sets its story in an atmosphere of intellectual fear and distrust, then pushes its characters in the direction of intercultural cooperation and support  . . . its battered heart is in the right place.” Anita Gates, The New York Times, October 31, 2006