THE MAIDS’ THE MAIDS 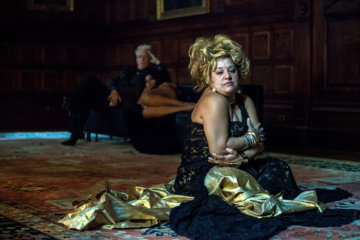 In The Maids’ The Maids, director Kathryn Hamilton and Sister Sylvester company members have partnered with domestic household workers in New York City to devise a response to Jean Genet’s notorious 1947 one-act The Maids. Using Genet’s central device of maids role-playing as their employer to expose the subtle (and not-so-subtle) humiliations involved in domestic labor and the experience of immigrants, the performance invites contemporary domestics to use the theatrical space to stage experiences from their own lives. What emerges is a portrait of two separate New York Cities: a city that serves and a city that is served. One is for the increasingly affluent English speakers who can afford domestic workers, while the other—separated by language—is that of precarious laborers, often illegal immigrants, who serve them. In the waste and excess of this rich people’s playground, who cleans up the mess?

Navigating the intersecting fault lines of labor, language and power, the show presents stories and experiences culled from the experiences of our collaborators in the their time as domestic workers, which are used to give depth and perspective to Genet’s celebration of ritual transgression through a “maids’ rebellion.” The show is performed in the native languages of the performers: English, Spanish, and Portuguese.

Kathryn Hamilton is a British director who is now based in New York City. In addition to independent work, she is the Artistic Director of Sister Sylvester. For Sister Sylvester, she has directedThe Ventriloquist Circle at Dixon Place; Look Back In, an adaptation of John Osborne’s classic Look Back in Anger; a New York City tour of The Box Man; a site specific production ofPlay America at Saint Cecilia’s Convent. She and the company are currently developing Hideouts for Time, or The Whale. Washington DC’s Shakespeare Theatre Company recently invited her to present at their AsidesLive Symposium on Site Specific and Immersive Theatre.